is always a good

Christmas Concert in the Cathedral of Burgos

Academic Theater of the Opera and Ballet

with the pianist Marta Vela.

With the special participation of the

Mezzosoprano Susana Torregrosa and the

Inauguration of the With Certain Friends

from the Casa de los Alcaines.

The Cenerentola by Rossini

Debut at the Villa Torlonia Theater in Rome,

in the role of Prince Ramiro,

With the special participation of the

Anthology of the Zarzuela 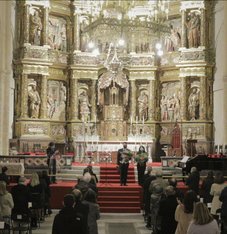 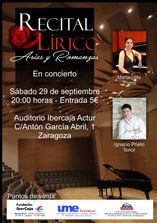 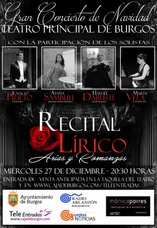 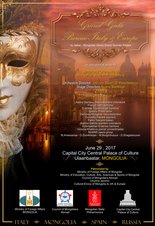 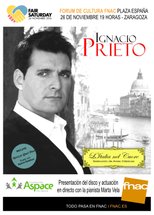 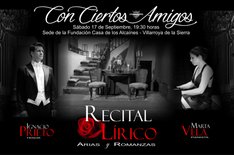 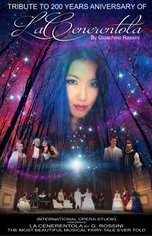 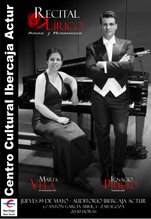 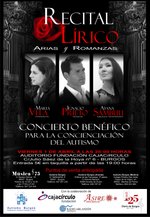 You also may interest...

Tenor Ignacio Prieto publishes his new EP "Vincerò" on the main digital platforms and launches the "Voces Solidarias 2021" campaign, donating all the benefits obtained from digital marketing and streaming during 2021 to the Spanish Federation of Banks Food (FESBAL)

You can collaborate by buying the songs on digital platforms, through streaming reproductions or simply by sharing this information on your social networks and WhatsApp groups.

You can also make your contribution directly at https://donaciones.fesbal.org/donacion-economica-puntual?amount=5 or through the FESBAL account in Bizum with the code 00090. 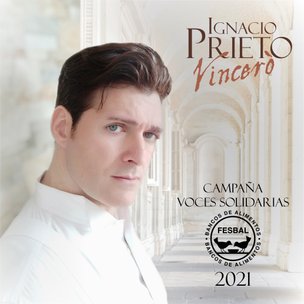 Christmas Concert at the Cathedral of Burgos

The event was a heartfelt tribute dedicated to all health personnel, members of the different State Security Forces and all those people who work daily to protect our health. 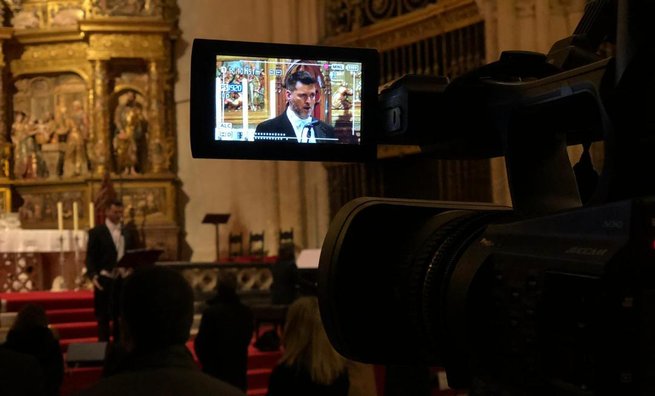 For the third consecutive year, the Great Christmas Concert organized by the pianist Marta Vela and the tenor Ignacio Prieto has exceeded all expectations, with an absolute full house and a dedicated audience that enjoyed an operatic repertoire of the highest level. On this occasion, they had the collaboration of the soprano Estíbaliz Martyn, whose exceptional voice conquered the hearts of the Burgos public, who at the end of the concert recognized the merit of the three artists with a long standing ovation.

Unlike previous editions, in which the concert was divided into a first part of opera and a second part of zarzuela, this year's repertoire proposed a journey through the best-known arias of Italian and French opera. After the concert, the three interpreters attended the audience in the photocall set up in the hall of the theater.

The Correo of Burgos 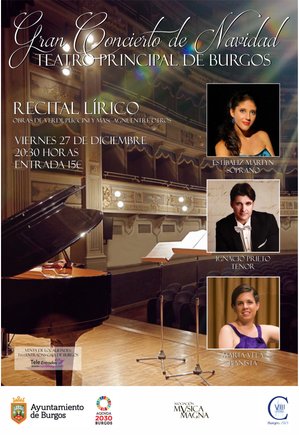 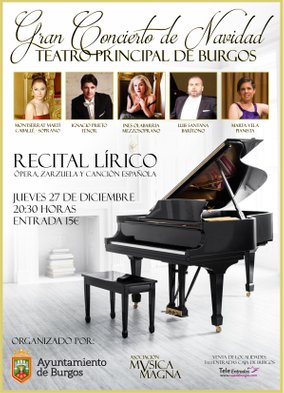 The soprano Montserrat Martí, daughter of Montserrat Caballé, the mezzo-soprano Inés Olabarria and the baritone Luis Santana have been the artists invited by Marta Vela and IGnacio Prieto to participate in the second edition of the Great Christmas Concert, which took place at the Teatro Principal de Burgos last Thursday, December 27. With a format similar to last year, where opera arias and Zarzuela romances were interspersed, the soloists performed a selection of the most representative pieces of both musical genres, ending the concert with an improvised Christmas carol encore for a dedicated audience.

Recital Lírico of Marta Vela and Ignacio Prieto returns to Burgos with a Christmas Concert that has counted with the participation of two great international artists, the mezzosopramo Ayana Sambuu (Italy) and the soprano Haydée Dabusti (Argentina). The concert, presented as a highlight of the Christmas cultural program of the City of Burgos, received a strong media coverage in the press, radio and television.

The repertoire chosen by the soloists brought together a selection of pieces by Puccini, Rossini, Albéniz and Agustín Lara, among others, which delighted the audience.

Ignacio Prieto, Ambassador of the Zarzuela at Ulan Bator

Coinciding with the 200th anniversary of the Opera "La Cenerentola" by Gioachino Rossini, an ambitious project that began three years ago with mezzo-soprano Ayana Sambuu, outstanding student of Maestro Paolo Montarsolo, and Unurma Janchiv, artistic director of the Creative Curating agency based in London.

The objective was twofold: to bring together a cast of international soloists (among which is a Burgalian), to offer a Gala at the Palace of Culture in Ulaanbaatar, Mongolia on June 29, and to represent for the first time "La Cenerentola" "By Rossini at the State Academic Theater of the Opera and Ballet of the capital on July 2.

To this end, the participation of the Mongolian Symphony Orchestra led by the prestigious Italian director Jacopo Sipari of Pescasseroli and soloists among which stand out the baritone Franco Cerri (IT) of the Puccini Foundation, the bass Pietro Toscano (IT) , the soprano Concetta Pepere (IT) who is also the first violin of the Teatro Verdi in Salermo or the Mongolian baritone Enkbat Tuvshinjargal, soloist of the Mariinsky Theater in Saint Petersburg. The Spanish tenor Ignacio Prieto, who already made his debut last year at the Villa de Torlonia Theater in Rome, and the mezzo-soprano Ayana Sambuu lead the cast.

The participation of Ignacio Prieto in both events is an unprecedented event twice, being the first Spanish tenor to perform Zarzuela at the Palace of Culture of the capital of Mongolia, and becoming the first Spanish soloist to star in a production at the Teatro State Academic of Ulaanbaatar.

Supported by the Ministry of Culture and the Ministry of Foreign Affairs of Mongolia, the project has received funding from large Asian corporations such as MIAT Mongolian Airlines or Monnis Group. Mongolia is thus a country in rapid growth, whose public demands a quality cultural offer without renouncing its deep-rooted tradition.

Both the representation of "La Cenerentola" and the Gala, which was broadcast live on television throughout the country, have received excellent criticism from different specialized media, so Creative Curating does not rule out the possibility of setting new dates in the United Kingdom or Spain. 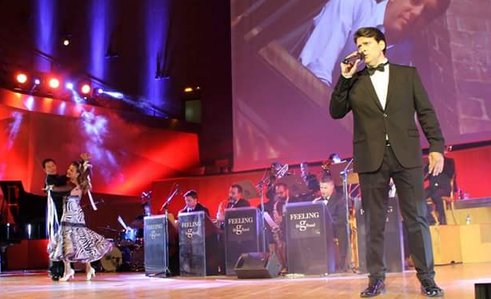 You can see it here      https://www.youtube.com/watch?v=VHzZ30qmLgk

for sale at FNAC coinciding with

his participation in the Fair Saturday event 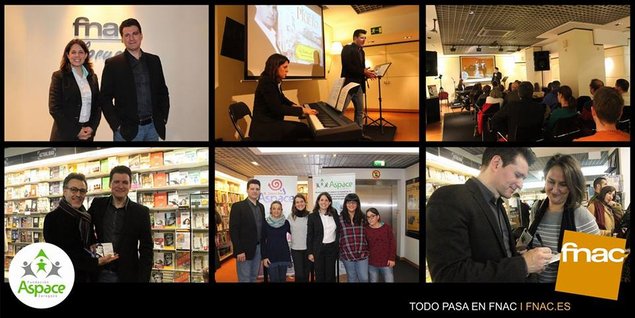 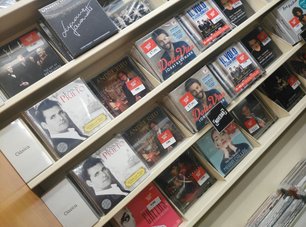 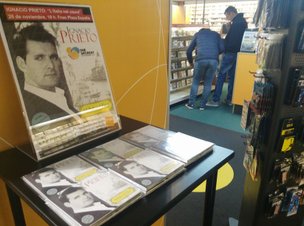 Ignacio Prieto has been selected to represent FNAC at the Fair Saturday 2016, the initiative that aims to promote culture and solidarity through art. The tenor offered a recital in favor of the association ASPACE Zaragoza during the presentation of his second album with the pianist Marta Vela.

The Recital Lírico of Marta Vela and Ignacio Prieto shows again its most supportive side to collaborate with Ayuda en Acción in the fundraising in favor of the victims of the earthquake that has devastated the coastal areas of Ecuador.

For the occasion they have had the special participation of the mezzo-soprano Susana Torregrosa and the choir Mvsica Magna, offering a complete program divided into two parts, with a careful selection of works of Opera and Zarzuela respectively. The gala has obtained great media coverage, announced in the press and with the appearance of the tenor Ignacio Prieto on local television singing live. The Cervantes hall in Zaragoza, which offers an annual program of live opera of recognized prestige, hosted the gala and the subsequent tasting of cavas that the organization offered to the audience that could exchange impressions with the interpreters.

The Cenerentola by Rossini in Italy 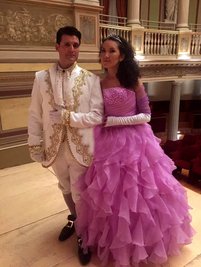 Ignacio Prieto made his debut in Italy as a tenor soloist in a large production with International Opera Studio, sharing the stage again with mezzo-soprano Ayana Sambuu with a cast of international soloists of the first order. The three performances, which included the participation of the pianist Victoria Khalilova, and the direction of choir and orchestra by the master Stephen Laurence Kramer, have taken place in such emblematic places as the Chigi Palace of Formello or the Villa Theater Torlonia of Rome, with a great reception by the public.

Rossini´s Cenerentola is the musical adaptation of the Cinderella story, (Ayana Sambuu), who this time lives with her stepfather Don Magnifico (Carlo Alberto Gioja) and her two stepsisters Tisbe (Myagmar Darim) and Clorinda (Sabina Galizia). Prince Ramiro (Ignacio Prieto), with the help of his servant Dandini (Paolo Ciavarelli) and his mentor Alidoro (Enkhbat Tuvshinjargal) will devise a plan in order to find true love. With a beautiful staging, this production of International Opera Studio plans to visit several European cities throughout 2017.

Marta Vela and Ignacio Prieto debut with their Lyrical Recital 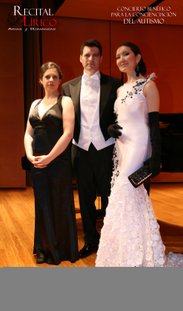 After several months of rehearsals and the selection of the right repertoire, the Recital Lírico by Marta Vela and Ignacio Prieto is now a reality. It is a musical show for piano and solo voice where both performers offer us a tour of the most famous classical pieces of Opera and Zarzuela. With a strong cultural and solidary purpose, the Lyric Recital plans to schedule concerts where the collaboration with different charities as well as the usual participation of national and international guest artists, mark the trajectory of the project.

Thus, on the occasion of the World Day for the Autism Awareness and in collaboration with Autismo Burgos, Cajacírculo Foundation, Asire Education, Diario de Burgos, Radio Arlanzón, Music 75, Mónica Porres Styling and Video Elitte, the first Lyric Recital concert took place , with the special participation of the Italian mezzo-soprano Ayana Sambuu before an audience that filled the auditorium of ovations and solidarity. A debut of authentic luxury whose collection was destined entirely to the work that Autismo Burgos does in favor of those people who present this syndrome.

The gala ended with this funny duet version of O Sole Mio: 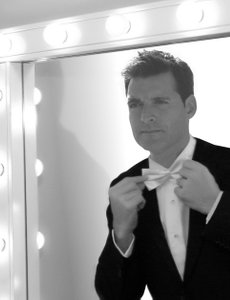 Italia into the heart  is the  title choosen  for the new album of spanish tenor Ignacio Prieto,  that will be available at main digital stores and streaming radio stations  worldwide from December 2015. Again under supervision of Yon de la Camara, the recording has been made October 16  at   Estudio 5 sound studios located at  Burgos (Spain)

This album collects a selection of classic italian arias and includes a very special collaboration with the mongolian / italian mezzo soprano Ayana Sambuu, singing the final duetto "Sprezzo quei don" from opera  "Cinderella" of  Rossini. The song was live recorded during the Liric Gala celebrated at Formello (Roma) last July (see previous news).  The new album shows vocal advances of the tenor compared with his previous CD "De Amore et Fide", largely due to musical formation imparted by counter tenor Sergio Garcia,  as the experience taked of his singing  partners from Coral Zaragoza and Teatro Lírico of Zaragoza. You can buy "L'Italia nel cuore" at several digital shops, choose your favorite link at  AUDIO & VIDEO section.

At present time Ignacio Prieto is preparing a liric recital which includes famous pieces from Opera and Zarzuela, accompained on  piano by Marta Vela, in what promises to be a music show charged of passion and sensibility. Ask for more information using the form from  CONTACT  section, or sending an email to info@ignacioprieto.net 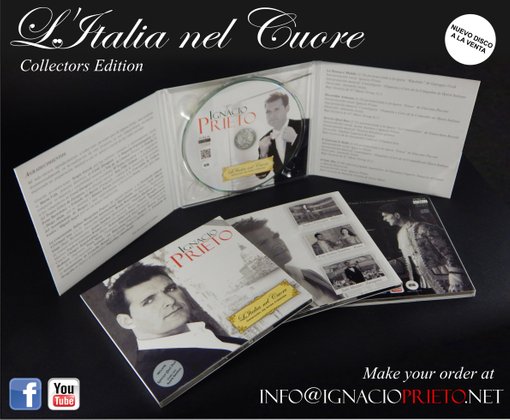 Chiigi Palace of Formello was the scenary choosen for the show, which included a large  guests list of  political and artistic personalities from Rome,  gathering several professional opera singers from Italy and Mongolia to sing some fragments from "The Barber of Seville" and "Cinderella" from Rossini. Thay were accompained by russian pianist Victoria Khalilova and conduced by Maestro Stephen Laurence Kramer.

Special  mention for mezzo  soprano  Ayana  Sambuu,  responsable  of  internacional matters of International OperaStudio, due her amazing performance and interest showed about participation of Ignacio Prieto on this Gala.

Selection of classical arias and romanzas 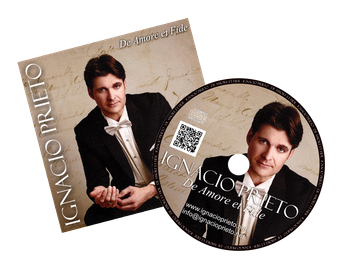 After a year been part of Coral Zaragoza CAI and recently incorporated to Teatro Lírico of Zaragoza, Ignacio  combines his participación at both musical formations and collaborates on diferent musical proyects.  He liked to consideer this very first recording as a point and followed on his, by thel moment,  short musical career. It is a promotional  free distribution album  with non comercial  purpose  ,  a first release of  200 copys available  on physical CD format.